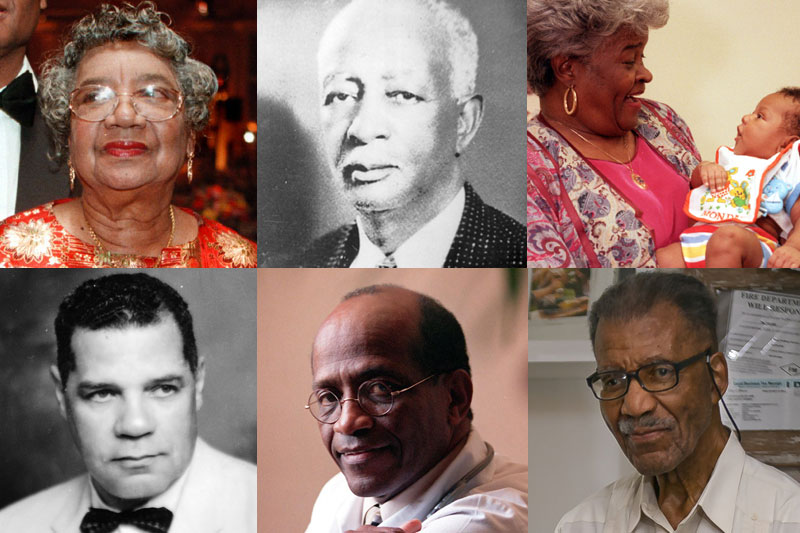 We’re shining a spotlight on six Black healthcare legends whose contributions to South Florida’s health and well-being deserve to be celebrated. Some names will be familiar, others may not be. And while we salute them during Black History Month, we believe it’s important to remember their impact all year long. They paved the way for many of today’s Black leaders and made our entire community healthier for it.

Read on to meet them.

“Before I came here, a lot of people didn’t even know the word pediatrician, or why it was important to go to one. Part of my success is that, to me, a patient is a patient, black, white, yellow, whatever.”*

As pioneering as she was, Simpson also understood the importance of staying grounded at home: she opened her private practice office in Miami’s Overtown neighborhood and made time for house calls to patients in Black communities throughout the county.

Growing up in Coconut Grove, Simpson graduated as the valedictorian of George Washington Carver High School. Encouraged to pursue her dreams by her mother, Kate Stirrup Dean, and her grandfather, E.W.F. Stirrup, a Bahamian immigrant who became a millionaire through real estate, she would go on to graduate with honors from Fisk University in Nashville, Tennessee, and was at the top of her class at Meharry Medical College in Nashville.

Meharry is where she met her husband, fellow student George A. Simpson, who would also go on to make Miami medical history. Dazelle Dean Simpson passed away in 2020 at the age of 95.

“The idea of giving back has always been a part of my thinking.”*

In 1958, Dr. George A. Simpson became Florida’s first Black board-certified general surgeon and soon thereafter became the first Black doctor to perform surgery at Jackson Memorial Hospital. Yet he liked pointing out that, in fact, he wasn’t the area’s first Black surgeon, rather that other Black surgeons “were not able to achieve certification as a result of segregation.”

Simpson graduated from Meharry Medical College in Nashville in 1950 and began an externship that summer in Fort Lauderdale alongside Dr. James Franklin Sistrunk, another Black pioneer in medicine. (Meharry is where he met a fellow medical student named Dazelle Dean, who would go on to become an African American healthcare pioneer as well as his wife.)

Simpson was also active in the fight for civil rights. He served as the president of the local chapter of the NAACP and worked to desegregate public facilities in Miami, including the lunch counters at Jackson Memorial.

A champion for making healthcare more accessible to the Black community, in 1969 Simpson became medical director of Miami’s first community health center​​: The Equal Opportunity Family Health Center, now known as the Jessie Trice Community Health Center. Located in Liberty City, it was a groundbreaking facility that hired social workers to fan out into the community to gather information about residents and their needs. It also became the first center of its kind to treat alcoholism through mental health programs.

Simpson served on the faculty at the University of Miami’s Miller School of Medicine and led the school’s family medical clinic. He still resides in South Florida.

“Being the classic image of a country doctor — heat, cold, stormy days or nights, muddy roads, rain — nothing stopped “Doc” from going to see his patients.”*

One of the first Black doctors in Broward County, Dr. James Franklin Sistrunk wasn’t just a beloved physician—he was a legend. He is said to have delivered some 5,000 babies over the course of his career and was known to be able to pick them out in a crowd years later. He was famous for making house calls no matter how inclement the weather, and for never turning away a patient who didn’t have means to pay.

In 1938, Sistrunk teamed up with Dr. Von D. Mizell and local community activist ​​Leola Collins to establish Provident Hospital, Broward County’s first Black hospital, run out of a small, one-story home in Fort Lauderdale. Sistrunk served as chief of staff for the six-bed facility, which grew steadily until it closed in the 1960s, when new federal laws forced the desegregation of hospitals across the country. In a remarkable professional journey, Sistrunk went from being denied work in Fort Lauderdale’s white hospitals to serving on the staff at Broward General Hospital.

Born in Midway, a small town near Tallahassee in 1891, Sistrunk was drafted into the military and served during World War I. Following his discharge, he attended Meharry Medical College in Nashville and graduated with honors in 1919. He served Broward’s Black community for more than 40 years.

Today, his name lives on in Broward in various ways: on Sistrunk Boulevard, the thoroughfare that runs through Fort Lauderdale’s oldest African American community; on the J.F. Sistrunk bridge, which runs over the north fork of the New River; and in Fort Lauderdale’s annual Sistrunk Festival, held in his honor. Sistrunk died in 1966 at the age of 75.

“My father always kept telling all of us that the medical field was the way to go, and by the time I was about 10 years old, I had already decided then that I wanted to be a physician.”*

Dr. James Wilson Bridges became a doctor in 1966, at an opportune time for Black physicians: the Civil Rights Act had been signed into law two years earlier, increasing opportunities for Black people and communities. Newly enacted federal laws withheld Medicare funding from institutions that discriminated based on race. All of it pointed toward doors opening for young Black medical professionals — and Bridges marched right through them when he became the first Black resident at Jackson Memorial Hospital.

When his residency at Jackson ended, he went into private practice with Dr. Stanley Johnson. In 2016, Bridges told The Miami Herald he and Johnson had been Miami’s only black OBGYNs, with a steady stream of patients.

Serving as a doctor for nearly 50 years, he made even more history along the way: he was the first Black Fellow of the American College of Obstetrics and Gynecology in Florida, and the first Black president of the Dade County Medical Association. And throughout his career he supported the creation of community health centers, which primarily served people from impoverished backgrounds.

Born in Valdosta, Georgia and raised in Overtown, Bridges attended college at Central State University in Ohio before earning his medical degree from Meharry Medical College in Nashville. Like his father, Bridges encouraged his children to go into medicine and, today, his two sons are physicians. In 2007, the Dade County Chapter of the National Medical Association changed its name to the James Wilson Bridges, M.D. Medical Society in his honor. Bridges still resides in Miami-Dade.

“Our children are our future, and if we don’t expend every effort to help our children, we won’t have a future.”

Her beginnings in healthcare may have been humble — she worked out of a trailer in Miami’s Brownsville area — but Jessie Collins Trice became a towering South Florida figure as well as a respected national voice in public health.

Armed with a master’s degree in public health, Trice dedicated her life to bringing healthcare to low-income communities. She founded Miami’s first federally qualified health center, The Economic Opportunity Family Health Center, which years later would be renamed after Trice herself. During the nearly two decades she worked as the center’s president and chief executive officer, Trice oversaw its expansion from one facility to 11. Today, the Jessie Trice Community Health Center boasts 16 facilities across Miami Dade County.

Trice retired in 1998 and passed away one year later.

Photo Courtesy of The Miami Herald

“As civil rights activist, he fought a good fight over decades, when it was dangerous to do so.”*

Dr. Von Delaney Mizell may have been Broward’s first Black surgeon, but he still had to fight hard to care for his patients. In a notorious 1937 incident, Mizell came to the aid of a young black man who was a gunshot victim. Two area hospitals had refused to treat the victim, but Mizell was able to argue his way into the operating room of a third hospital. There, with no help, he removed the bullet from the victim and saved his life.

It wouldn’t be Mizell’s last battle. The founder of South Florida’s first NAACP chapter, in 1961 Mizell began organizing wade-ins, which were modeled after sit-ins, to call for the integration of local beaches. He succeeded: the following year the county’s beaches opened to everyone.
Mizell also took on racial discrimination in education. In 1948, Mizell ran for the county school board, which drew the ire and violence of the Ku Klux Klan. Mizell’s home was vandalized three times, and crosses were burned on his lawn. On their fourth attack, Mizell reportedly greeted the Klan with a shotgun and turned them away.

Mizell famously went up against the Broward County Medical Association, suing and winning the right of admittance. His victory paved the way for Black doctors to be granted privileges at local hospitals.

Born in Fort Lauderdale in 1910, Mizell graduated from Morehouse College in Atlanta and served in the military during WWII. In 1938, he worked with Dr. James Franklin Sistrunk and local activist Leola Collins to establish Provident Hospital, Broward’s first Black hospital. After Provident closed in the 1960s, it became the Von Mizell Cultural Center and Library, now located off Sistrunk Boulevard. Mizell passed away in 1973.