Non-profits, faith-based organizations, community leaders and other trusted messengers sign on to support the campaign, which features local residents and is filmed against the backdrop of South Florida 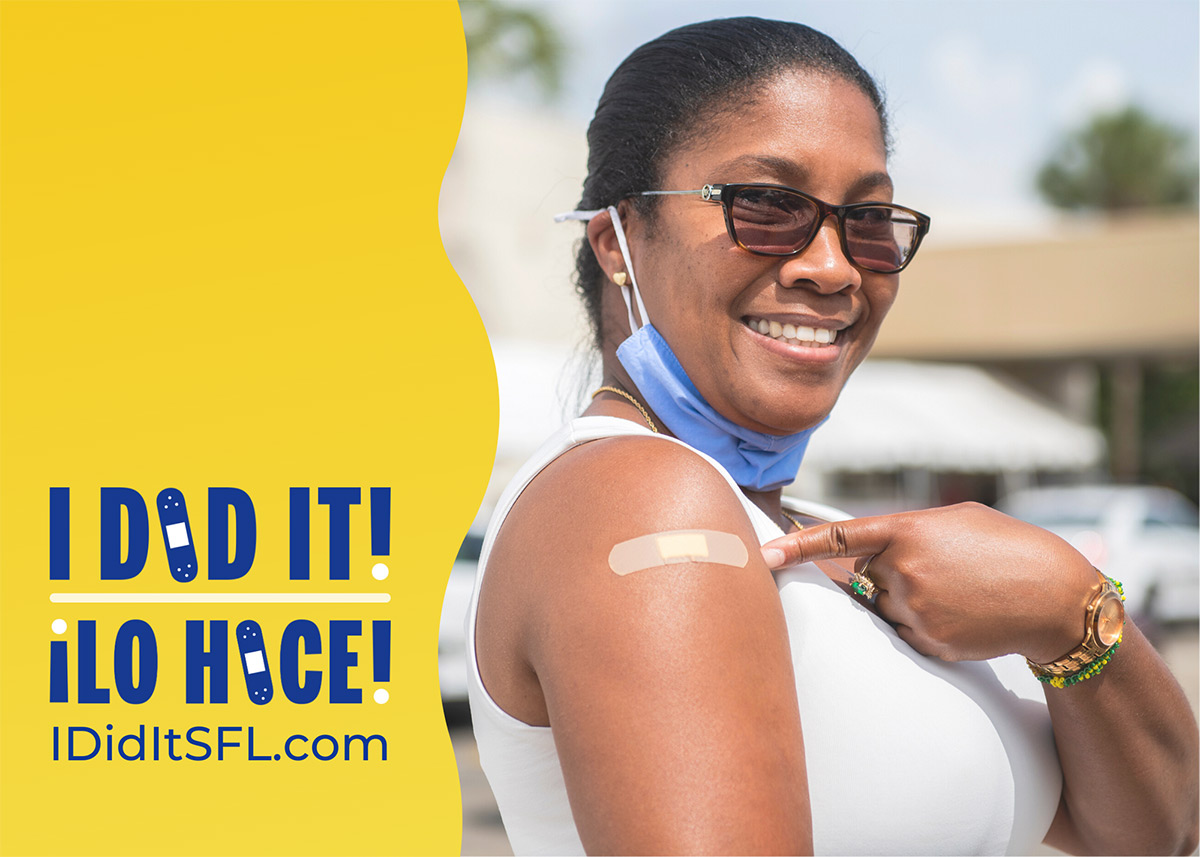 The Health Foundation of South Florida, in partnership with Miami-Dade County and Broward County, today announced a major communications effort encouraging South Florida residents to be vaccinated against the COVID-19 virus. The “I Did It!” campaign, a first-of-its-kind, cross-county effort spotlighting local people and leaders, is designed to reach some of the region’s most vulnerable neighborhoods that have been disproportionately impacted by the pandemic, in primarily Black and Latino communities.

The campaign, which will be activated across broadcast television, radio, outdoor, print, digital and social media, will be unveiled at a special event at 12:45 pm on April 21st at Florida Memorial University, which just recently was designated as a vaccination site. The unveiling, where the campaign’s public service announcements in both English and Spanish will be screened, will feature remarks by Miami-Dade Mayor Daniella Levine Cava, Broward Mayor Steven Geller, Broward County Commissioner Nan Rich and Health Foundation of South Florida President and CEO Loreen Chant.

The initiative is the result of a unique collaboration between leading experts in government, philanthropy and healthcare, including Presenting Partner Baptist Health South Florida, as well as Memorial Healthcare System and Jackson Health System. In addition, more than 1,000 community-based organizations, faith leaders, businesses, medical experts and other trusted messengers are being engaged to support the effort, which was created in close partnership with both the Miami-Dade and Broward Florida Departments of Health. Additional support was provided by Allegany Franciscan Ministries and the Children’s Services Council of Broward.

While the campaign message aligns with that of the Centers for Disease Control and Prevention (CDC) and the Florida Department of Health, it is produced with unmistakable South Florida flavor and flair. All of the campaign’s assets drive audiences to visit IDidItSFL.com, where reliable, accurate and timely information about the COVID-19 vaccines will be available in English, Spanish, Haitian Creole and Portuguese, with the goal of debunking myths and misinformation and increasing overall vaccine confidence.

“This is a truly unprecedented initiative for an unprecedented moment in history. We have assembled a remarkable group of partners from across the region to help not only guide the effort but amplify it,” said the Health Foundation’s Chant. “As an organization whose principal mission it is to address the inequities that prevent too many residents from living healthy lives, we understand there is no more important task right now than ensuring our most vulnerable communities have access to reliable, accurate information about the vaccine and to the vaccine itself.”

As part of the effort, the Health Foundation is also providing grants to local non-profit organizations to help them activate the “I Did It!” campaign in the neighborhoods where they operate, which stretch from Homestead to Pompano, from Little Havana, Overtown and Miami Gardens to West Park, Sistrunk and Deerfield. Grantees include: Urban League of Broward County, New Mount Olive Baptist Church, Healthy Little Havana, Centro Campesino, Overtown Youth Center, James Wilson Bridges MD Society, Urban Health Partnerships, City of Miami Gardens, Hispanic Unity of Florida and Opa-Locka Community Development Corporation.

The grants, which will fund everything from door-to-door canvassing to distribution of informational materials to pop-up vaccine sites, are part of a larger $1.5 million investment on behalf of the Health Foundation to respond to the racial and ethnic disparities caused by the COVID-19 pandemic.

“Our on-the-ground partners are telling us exactly what people’s concerns and worries are, and we and our campaign partners are responding with facts and information to empower them,” said Health Foundation Board Chair Melida Akiti. “We are letting them hear directly from people in the community about what inspired them to take the vaccines. Ultimately, our goal is to help people make the best decisions for themselves, their families and our community.”

Although 1.7 million people across Miami-Dade and Broward counties have been fully vaccinated, and as the region approaches a 25 percent vaccination rate, hesitation and resistance to taking the vaccine persists in certain areas, often fueled by distrust and disinformation.

“The ‘I Did It’ campaign is an amazing grassroots effort to increase vaccine confidence in our vulnerable and underserved communities,” said Broward County Commissioner Rich. “It is critical to achieving “herd immunity,” which will allow us all to return to our normal lives.”

“I am so proud that over 1,000,000 Miami-Dade residents have now received at least one dose of the vaccine,” said Miami-Dade County Mayor Levine Cava. “They can now proudly say, ‘I did it!’. The vaccine is our best shot to return to normal and put the pandemic behind us, and this campaign will help us reach all communities to promote the importance of getting the shot – to get back to work, play, and spending time with those we love.”

To create the campaign, the Health Foundation enlisted Miami-, New York- and Los Angeles-based production company NGL Studios, under the creative direction of Ben de Jesus, who co-founded the agency with award-winning actor and producer John Leguizamo. The South-Florida-based creative team collaborated with the campaign partners to create the “I Did It” concept and also filmed a series of 30- and 60-second public service announcement spots that will be widely distributed.

The messaging not only empathizes with the hesitations and questions residents have, it also respects and reinforces their ability to make the best decisions for themselves and their families, and conveys the relief, hope and empowerment that comes with making the choice to be vaccinated. Creative assets in English, Spanish, Haitian Creole and Portuguese will begin to appear and circulate this week and will continue to roll out over the next six to eight weeks.